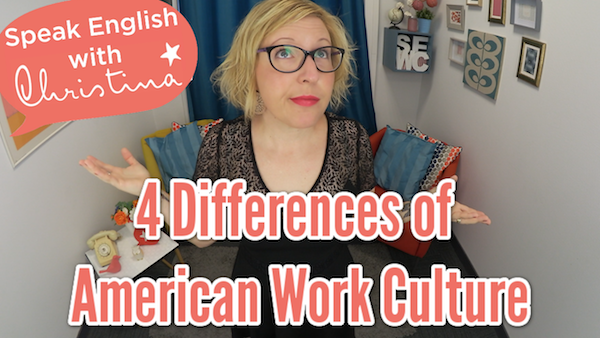 In your professional life, you might be working with American people. And when you’re from a different culture, with different attitudes about work, you’ll probably meet some unexpected difficulties.

This is totally normal when you work with different cultures, but that doesn’t make it less frustrating. You ask yourself “Why are Americans like that?”  And “How can we work together better?” Don’t worry, I’m here to help!

American culture is founded on individualism. In our common mythology, American heroes are the self-made man. The lone cowboy. The do-it-yourselfer.

In fact, The Hofstede Center, which specializes in intercultural comparison and communication, did a study of 50 countries on several criteria. Which country was the most individualistic?

For better or for worse, it’s the United States of America.

We have a strong attitude of “do-it-yourself”, which is great if you’re alone on a Texas ranch, but might also sometimes prevent some Americans from being a natural team player. This is part of the reason why “team-building exercises” are such a big thing in the US: to teach individualistic American people how to create a team spirit.

For many Americans, they especially don’t like a manager who tells them how to do their job. They want to have some freedom to choose their own way of doing things, and they expect to be rewarded individually for the results.

That’s why all those “Employee of the Month” awards are so common in American companies.

Now of course, like everything else I’ll mention in this video, these are only general guidelines. It doesn’t apply to everyone, and personalities within each country vary a lot.

American people tend to define themselves by their occupation, and that might be a big cultural difference with foreigners in some cases. “What do you do?” is a very common small talk question with strangers.

The boundaries between the professional and personal also means that it’s not uncommon to work on weekends or at home. Even in holidays–when they exist. Companies aren’t even required to give their workers paid leave.

American people also work longer hours. In a recent poll, around 20% of them worked 50 or more hours a week – it’s just business as usual!

Friendliness in the office

Are Americans friendly in the office? American people tend to be much more friendly from the start.  For instance, they’ll share a lot of personal information with strangers, just to start a conversation. That might seem strange to you if your culture values personal privacy where friendship is more sacred, and selective.

American people also tend to appear less confrontational, and to search for common ground. That means that they might feel “scared” or uncomfortable if you try to get into a heated debate about the slightest thing: they might think a real, important disagreement is going on, while you think it’s just healthy exchange of different points of view.

Finally, professionals from other cultures, such as French culture, tend to be much more conceptual than American workers.

Perhaps in your culture, when discussing an idea, the common approach is to try to justify it with theory, general arguments and intellectual ideals… In contrast, many Americans want to jump right to the practical applications.

This cliché also ties into the previous differences: in a random friendly conversation, in your culture, it may be normal to debate over grand theories, while American people will share personal stories.

Try to mix both, as these two visions have their own strengths and weaknesses!

Have you ever worked with American people? Which cultural difficulty did you face?

Write your answer down in the comments and share your story with us!

Finally, don’t lose professional opportunities because of your English. Get my insider tips and interview secrets to get the job at your next interview.

And of course subscribe to my channel, so you get a new English lesson each week!
Thanks for watching Speak English with Christina, and I’ll see you next time!