Immersion wasn’t enough for me Many years ago, when I arrived in France, I thought learning the language would be easy now that I was in the country. After all, I was in total immersion, and that’s all you need, right? Just like you can learn English with only fun books, movies, and the Conversation Club, right?

Well… All of it is good and useful, obviously.
But it’s not that simple.

Today, let me share my story of learning French with practiced learning – and how my experience (and the lessons I learned) can help you learn English better and faster.

1. When I arrived in France, I thought I didn’t need deliberate learning

I arrived in France in 2003, for a study abroad program. I was so happy!

I was sure I would learn the language quickly. I was in total immersion, after all! I didn’t need to:

Or so I thought…

Quickly, I was able to use typical phrases. Like “Do you have a table for 2 please?”, or “I’m sorry, I’m learning French, can you speak slowly?” And it felt great! I could talk to French people!

But as time went on, I realized that… it wasn’t that easy.

When I was hanging out with my new French friends, and they were talking to each other, I got lost pretty quickly. Of course, they can’t wait for me to understand, before starting their next sentence! I wished these real-life conversations had subtitles…

So I didn’t understand much, and I couldn’t participate. I just smiled, laughed, and hoped that no one would notice that I was totally lost in the conversation!

– Abroad: in a foreign country
– “As time goes on…” : later, gradually
– To hang out with someone: to spend time with someone, casually

So I started to really work on my French. I couldn’t just sit there and wait for the language to absorb into my brain! If I wanted the language to make sense in my brain, I needed a system. I needed real lessons. I needed structured, deliberate learning.

A French friend of mine had spent a year in England. He understood how hard it was to learn another language. So I reached out to him, for help.

I asked him to explain all the cultural references and jokes I missed. I asked him to let me ask questions when I didn’t understand. Because, really, I needed someone to help me with this.

And that’s when I started to make a lot of progress!

Finally, after about 6 months, I could have a new (almost) normal life in French! I could make new friends without feeling lost… And I even got my first job in a foreign language!

That was a giant boost for my confidence. There were days when, as I was going to work, I told myself: “Hey! You’re living in another country. You have friends in another language. And you’re going to work in this new country and culture!”

I was so proud that I had actually succeeded in doing this! Just a few years before, I never could have imagined that it would be possible.

– To make sense: to be understandable, to appear logical
– To reach out: to ask someone (that you don’t know well) for their opinion, advice, or help

3. Deliberate learning: the results (valid for your English too!)

Everything that I learned about how to learn a language effectively, with a structured system of deliberate learning… You can use it to learn English too!

Basically, if you get a system, you can get results.

Take the tenses, for example. When can you use “I have been” instead of “I was” ?
Are there exceptions?
Can you use both?

With a good course, you can get clear explanations.

A teacher can also show you the nuances, and answer your own questions about the topic.

– Past forms in English: “Would” and “used to”
– Past tenses in English

You can hear a ton of spoken, colloquial (or idiomatic) expressions in English conversations. That’s great.

But it won’t do you any good if you can’t understand them! If you only follow what you think they mean, you might make mistakes.

Are you always sure of what they mean precisely? Even in their metaphorical meaning?

That’s where a course such as Understand Real American English or a teacher as with the  program Speak Business English Confidently, can help you: : to give you an explanation you can trust. To reassure you that you’re learning correctly!

Here’s a secret: Nobody will actually correct your English pronunciation.

We consider it rude to correct someone’s English. And we don’t want to be rude!

So we’ll try to understand what you mean. If we don’t understand, we’ll just pretend. The good side is: you’re not embarrassed or uncomfortable, in the short term. The bad side: you’ll never learn the correct pronunciation!

So yeah, nobody will correct your pronunciation.

Even if you have a terrible pronunciation.
Even if they don’t understand you.
Even if you obviously tried to pronounce a word that you only saw as written.
So you might go your whole life thinking you’re using a word correctly… until you hear an English-speaking person say it once with another pronunciation. And you realize you were wrong all this time. And that hurts!

It happened to a French friend of mine. He was spending a year in the USA. And he kept saying “mash-id potatoes.” That was a good guess… but it was incorrect.

And no-one ever corrected him. For the entire year!

And one day… At the restaurant… He heard a waiter use that word, sounding like “masht potatoes.”

In that instant, my friend realized he had been wrong for a whole year! And nobody ever told him, because they understood what he meant… and “it’s so cute when you pronounce words wrong!” Have you ever heard that from your native speaker friends? Ugh.

And that’s the results you can get (and the mistakes you can avoid) with practiced, structured learning!

(And that’s the kind of things you’ll get from my course Understand Real American English.)

Thanks so much for improving your English with me, and I’ll see you next time!
Christina 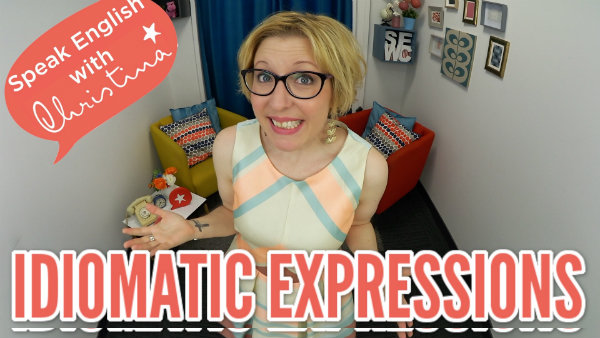