You’ve probably heard these words from your American coworkers and friends. Or in movies!
They’re (very) common “shortcuts” of everyday verbs in American conversations.

I want to show you what they sound like, with some extracts from my course Understand Real American English, which helps you understand in real conversations. After all, that’s why you’re here, right? To learn real-world English! And after hearing the fast conversation extracts, of course I’ll help you understand them. This way, next time you hear them in conversations, you’ll understand better!

Gonna is the contraction for “going to”.
That’s how we say that verb in casual, spoken English.
A whole syllable disappears! It happens, especially when talking fast.

(I cover something similar in this other lesson: disappearing sounds in English.)

In the video lesson (at the top of the page), you’ll find an extra recording of my conversation with sister Lisa. It’s a short clip, taken from the full video conversation that you can find in Understand Real American English.

Do you understand what we’re saying?

She said:
“Originally, I was gonna pick them up, but then I took this other job, so now I work during the day”
She means:  “I was going to pick them up.”

Try it yourself!
Transform this phrase into casual, spoken American English:

Are you going to stay here?

(You’ll find the answer in the video lesson!)

Wanna is the contraction of “Want to.”

For example, in “correct” English we would write: “I want to know!”
But in everyday, real spoken English, we would often say: “I wanna know!”

The “to” here is softened. You’ll find more explanation in this other pronunciation lesson: Pronunciation of “to” in English

You’ll find another example in the video lesson, when I’m talking with good friend Colleen. She’s my “sorority sister,” actually: we were part of the same social club in college.

It’s a short clip – you can watch the full video (with explanations, exercises, and community events!) in Understand Real American English.

Can you hear when we use the contraction “wanna”?

She says:
“It’ll allow me to, like, experience other places around the world, which is what I really wanna do.”

It’s a contraction of “What I really want to do.”

I add: “Yeah, right. ‘Cause I just wanna- I just wanna travel and go places. And get paid to do it!”

In “correct” written English, I would write instead: “I just want to travel and go places.”

“Like” is used very often in American conversations. For three reasons:

A “filler” word is a word that doesn’t really mean anything, and that isn’t necessary in the sentence: like “uh” or “hmm.”
So American people use “like” when they’re looking for the right word. Or to sound less sure of what they’re saying.

For example:
“It’s, like, a real thing.”
“You are, like, really lost right now.”
“I want to get better at English, like, I really want to put it on my next resume… or just to understand Game of Thrones!”

There are a lot of other “shortcuts” and small expressions in real American conversation.
Let me help you understand them! You’ll find much more tips like this (and community events) in Understand Real American English.

Yes, “got” is a very useful verb – like “get,” a verb that’s everywhere in English.
(Click here to find out several uses of “get” in English verbs and expressions.)

For example, all these sentences mean pretty much the same thing:

You want to hear it in a real conversation, like with my cousin Jennifer, and take a little trip with us? In the video lesson, you’ll find a short clip of our conversation.

In the written transcript of the lesson (that you’ll find in Understand Real American English), you’ll find that part written as:
‘Cause how d- how do they do it here? Is it you come to the roundabout and you gotta wait until … the roundabout is, you know, free?

If you want to sound more casual in American conversation, how would you say:

We have to leave before we miss our train. ?

(You’ll find the answer at the bottom of this written lesson.)

Did you notice? In the conversation sample, I also used “Cause” instead of the “correct” Because. That’s not a new word, it’s just casual pronunciation. It’s often used in everyday American conversation as well.

“Cause” / “Because” is very useful to express your thoughts more naturally. You can find more words like this in another lesson: linkwords in English!

“Ain’t” is an extra verb shortcut, that’s very common in American English conversation.
Many students can be quite puzzled by “Ain’t” when they first hear or read it.
You often don’t learn it in school!

(Find more English expressions that you don’t learn in school in that lesson: 5 Everyday English Expressions)

For example: “Ain’t got no money, sorry.” What does it mean?

It’s a bit more casual than the previous examples, so the grammar tends to be even more “incorrect.”

For example:
“You ain’t no quitter.” = “You’re not a quitter.” (a quitter is someone who gives up, who quits when things are difficult.)

Finally, you can sometimes hear “Ain’t” without any pronoun before, even!
Then it depends on the context, but it often means “I ain’t.”

One last common shortcut is using Y’all = You all as a way to say “You (in the plural).”

In some parts of the USA, like Texas, “Y’all” has become almost an “official” new pronoun in conversations. It’s handy (= useful / practical), since there’s no other real way in English to make the difference between “You” the plural (“Everyone of you”) and the singular (“You specifically, the person I’m talking to”.)

Let’s recap, to help you remember. In this lesson we’ve seen:

(And the answer to the question in 3 is: We gotta leave before we miss our train.)

In everyday casual American English, you’ll hear these words (wanna, gotta, and gonna) a lot more often than the full forms (“want to”, “got to”, and “going to”.) So they are absolutely essential for you!

In real spoken English, you’ll find so many other examples of connected speech like that. That’s why you need to train your ear. So you can better understand what American people say!

To go further with this, I made you a short playlist of other lessons on pronunciation and listening skills. You’ll find how to understand and pronounce better, so that step by step, you become more confident in conversations.

I’ll see you in the next video! 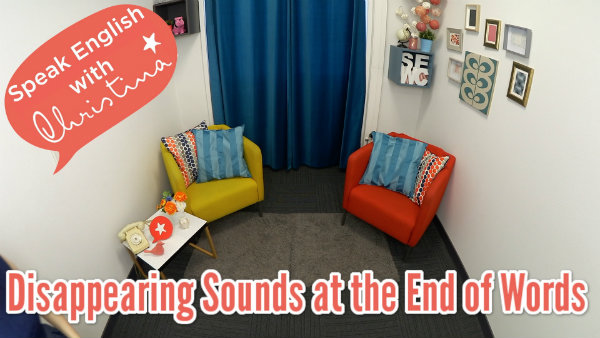