Differences between oral and written English I have a couple of questions for you:
Have you ever written to put it in a nutshell to sum up your conclusions in a report?
Maybe you’ve said something like nevertheless further assistance was required during a quick small talk chat at the water cooler, before changing the subject in the conversation?

This sounds a bit odd, doesn’t it?

If either of these situations reminds you of something you’ve done, you may have gotten a few strange looks from your customers and colleagues!

Your English was correct, but it wasn’t right for the situation you were using it in. You’d be surprised how many people make mistakes like these, especially with American business idioms.

In your first language, using the right type of language for the situation — speaking or writing — comes naturally to you, but it’s something you have to learn when you’re using English, and that’s what you’ll learn today.

Make the differences between oral and written English naturally, with practice

It’s great that you learn by watching my episodes. And you’ll learn even faster by practicing what you learn in real conversations in English.

In my Faster Fluency Conversation Club, motivated students meet four times a week with one of my expert English fluency trainers to practice speaking English in small groups, with motivated members of the Speak English Community.

Each week, we focus on a different theme of conversation.  To prepare, you receive vocabulary and grammar related to that theme so you can get more vocabulary, then come the sessions to practice using it in real conversations.

You also get episodes of our Fluency Club Podcast, to understand native speakers who speak fast!

The Faster Fluency Conversation Club is a fantastic way to gain fluency faster, while having a lot of fun!

Do you want to join us?

Click here for all the details (and to save -40% off your first month of membership!)

Now, let’s get into spoken and written English.

We’ll look at three examples of mistakes students make with their written English. The reason for all three mistakes is thinking that you can write just like you speak — unfortunately you can’t!  Then we’ll look at how you can avoid making these mistakes.

An idiom is an expression which means something different than the normal meaning of the words in it.

Maybe you know idioms like: in a nutshell, that costs an arm and a leg or they’re a dime a dozen.

Idioms can be useful in conversation because they make your language more colorful and interesting to listen to but it’s unprofessional to use them in formal work documents, including most formal-style emails.

How can you not make this mistake?

An added advantage to this is that your writing will be much clearer, especially if you work with other non-native speakers of English.

The same goes for slang. You probably already know that slang is very informal words and expressions people use when they’re speaking. It’s a good idea to know some American slang expressions, so you can use them in your conversations to sound more natural and casual, but avoid using them in your professional written communication in English.

So you may hear the characters in your favorite American TV show saying ‘the kids are hanging in there’ or telling people that their new coffee shop is ‘way better than the old one’ or that they ‘can’t be bothered to go out tonight’, but that doesn’t mean you should write stuff like that on your company’s website.

There’s another one for you — ‘stuff’ — don’t write that on your corporate website either! It’s an informal word that is used to generalize about objects, items, material, etc.

For example: “There’s a lot of stuff in the breakroom that we need to get rid of before the new boss starts next week.”

How can you not make the mistake of using slang expressions in your written English?

Remember that the words you hear on your favorite American TV shows or see in English social media posts aren’t necessarily suitable for written English at work. But they’re perfect for informal conversations between colleagues!

Try to be more specific and use more formal words — these usually have at least two, and usually three or more syllables.

You could simply list the specific things that you are referring to.

Differences between oral and written English: Informal grammar and vocabulary

In English, some grammatical structures are also considered very informal. While it’s natural (and perhaps even preferable) to use them in spoken conversations in English, using them in written English would sound strange to many advanced and native speakers.

A good example of this is the passive voice with get structure, like “to get things done.”

It’s fine to use it when you’re speaking. Let’s imagine you’re giving a tour of your production site. You might say: “This is where the engines get put together”

But, if you’re  writing up a report on that factory tour later, you need to use the regular passive instead because it’s more formal and, therefore, more appropriate for that context.

In order to really get the right style for written English, you would need to replace put together with assemble.

Tell me: Which of these three mistakes have you made in your written English?

Don’t be ashamed, it’s perfectly normal to make mistakes when you’re learning, and we can use our mistakes as learning opportunities.

So share them with us, and help other members of the community learn from your mistakes!

You can then reply to someone else’s comment and tell them how they could have got the right style instead.

It’s  a great way to practice, and share with the world!

If you use English for your work in an international context, speaking skills and understanding different accents is an essential skill.

And to help you feel confident doing this, I created the Faster Fluency Conversation Club.

You get plenty of practice to speak English and receive feedback on mistakes or suggest ways you can speak more colloquially, so you gain fluency faster.

You can get all the details and save -40% off your 1st month of membership by clicking on this link. (Use the code FFCC40 when you check out)

Thanks so much for learning with Speak English with Christina. I’ll see you next time! 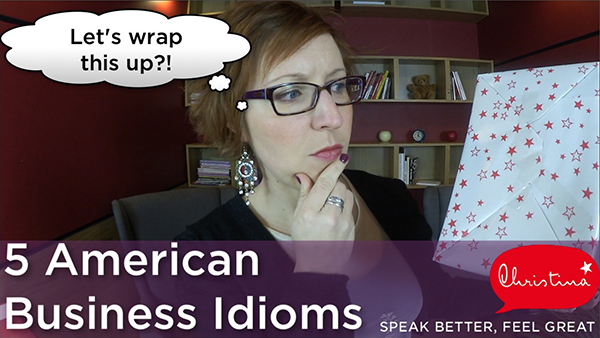