No “Hi” on Emails: What’s the Deal About Email Greetings? Hi there! I’m your English coach Christina, welcome to Speak English with Christina, where you’ll learn American culture and business know-how to become confident in English.
Today I want to help you with your emails.

Commenter Michael had a great question: “I always start my email to my franchisor by “hope everything’s ok” or stuff like that. And today, he answered with no “hi” or anything… Just answering right away my question. Should I do the same? Should I stop being polite and just go to the point next time?”
Great question, Michael, let’s look at this one!

Let’s say that Anna just received an email from Paul, an American colleague.
The message starts with “Do you have last year’s sales report?”. It’s direct: there’s no greetings like “Hi Anna,” “Hello” or even “Dear Anna”… She feels confused: is Paul being rude? Is he upset? Aggressive?
Then Anna gets worried: is Paul writing normally, and she is the one lacking etiquette when she starts all her emails with “Hello” and “How are you” ? Maybe adding such a personal introduction is not OK in American culture?

Anna notices she’s confused. She knows it’s probably a minor misstep anyway, so it would be weird if she bring it up to Paul, yet she’d like to know more.

Well, don’t worry, we’ll figure out what to do!

What’s the deal with email introductions?

However, there are two main reasons we would skip the greetings. The first one is when it’s the best we can do: when we don’t really have time to respond properly, but we still want to send the information. So we’ll write the minimum, and “Hi Anna, how are you?” gets cut.

The second reason is close to the first, but much more common. Emails used to be treated as letters, but now they tend to be seen almost as instant messaging. We type it on our phone, and we treat a series of emails as a flowing conversation. You wouldn’t say “Hello” to your friend every time you start a new sentence in messenger, would you?

The way we view email conversations is more a personal than a cultural difference, so they’ll always be some time of adaptation with each person you meet. As you get more familiar with the other person, you might even drop the introduction, so it can be a sign of friendliness!

Anyway, the worst case scenario is probably skipping the introduction when emailing someone for the first time. Don’t do it. If someone does it to you, it’s not nice, but they probably don’t want to be rude. It’s just a little lack of etiquette at worse; they forgot that social cues get lost in writing.

There’s no hard rule about it, but I want to give you some quick guidelines you can use.

If you’re emailing someone for the first time that day, a quick greeting won’t hurt.

If it’s a conversation during a day, like if you’re collaborating with a colleague on an ongoing project, you can cut straight to the chase.

But if you haven’t emailed the other person for a day or two, go ahead and put a quick “Hi Anna,” (or whatever their first name is). Honestly, it takes 3 seconds.

And if it’s been a while, maybe a week or so, sure, a little greeting like “I hope you’re doing well” or “I hope you had good weekend” never hurts.

Now, tell me: what other problems did you face when writing your last email in English?
Share them in the comments!

Want to immediately understand 12 everyday expressions that Americans say fast? Get my free pronunciation and comprehension lesson with exercises. Just click here! And of course subscribe to my channel, so you get a new English lesson each week! Thanks for watching Speak English with Christina, and I’ll see you next time! 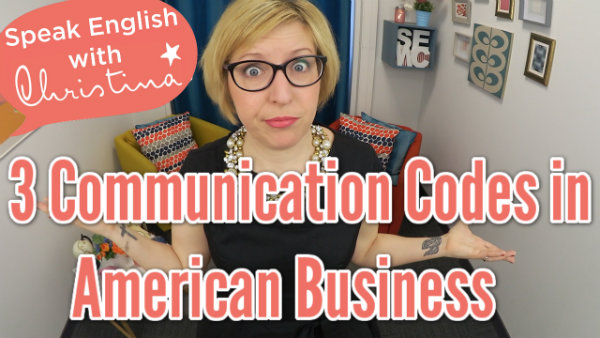